During WW II, advances toward the enemy often ran allied troops painfully short of supplies. Armies without food to feed the soldiers or medical supplies to mend the injured as well as guns without bullets would soon bring the best trained Army to its knees. To ensure that the Americans and the allies were well supplied with everything they needed to advance against the enemy, the Red Ball Express was created.

The Red Ball Express was a large convoy of trucks filled with supplies. The name originated from the idea of announcing someone very important. A white flag with a red ball centered on it indicated a vice admiral’s ship. Later, the name “red ball” referred to perishables in rail cars that needed to have the right of way to prevent spoilage. Thus, “red ball” attached to any type of transport meant that it was important and vital that it reached its destination quickly.

Of the drivers of this trucking convoy, 75% were of African American descent. This was in part because during WW II, the general idea of the military echelon was that the black soldier was not as capable in combat as the rest of the troops. Therefore, black soldiers were routinely assigned jobs in the mess hall, the laundry, the motor pool and as drivers.

The drivers would drive at speeds no faster than 25 mph during enemy territory. Up to 140 trucks were on French roads at one time to supply General Patton’s Third Army 350 miles away as well as the First Army, at a 400 mile distance. Night driving had to be done without headlights to avoid being spotted by enemies.

The program came to a halt in November 1944. By that time, about 412,000 tons of various items, including gasoline, ammunition, oil, food and other needed supplies had been delivered by the Red Ball Express. 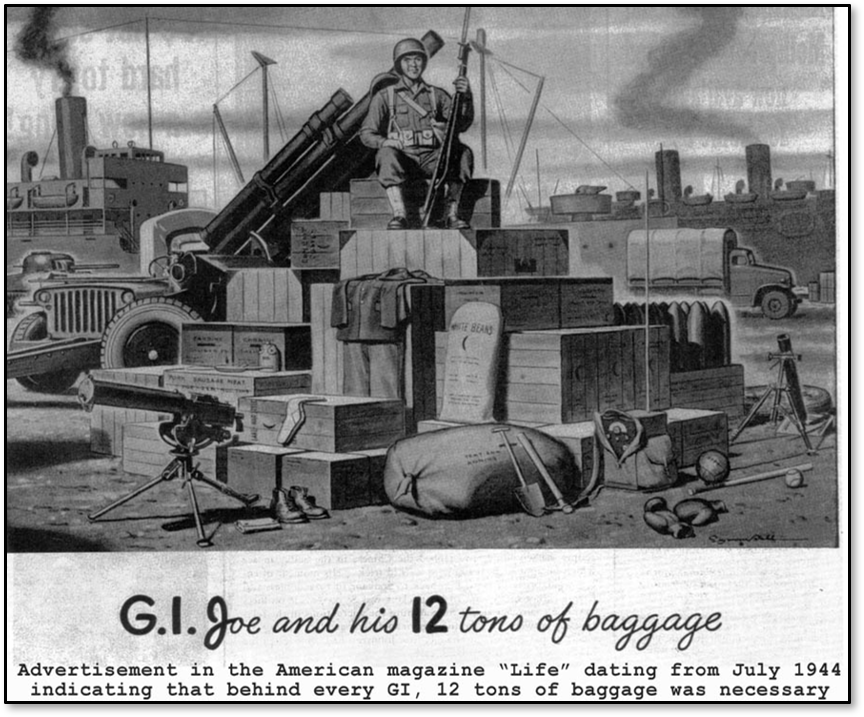 Research efforts attempting to identify how many tons of baggage the modern-day G.I. Joe and Jane require came up empty…one can imagine that figure has steadily grown since the Second World War.

The Red Ball Express only lasted a few months; however, this feat of arms of the African-American majority driving force is legendary.  Casualties did occur and though these soldiers were considered “rear-echelon”—they encountered sabotage, strafing attacks, and fatal accidents due to fatigue and worn-out equipment.

Though he may be better known portraying Frank Merrill in the film Merrill’s Marauders, Jeff Chandler starred in highly fictionalized account of the Red Ball Express in the early 1950s.  The fiction was the integrated portrayal of those driving the routes.  What is not up for debate is the critical nature of logistics.  The film clip drives this point home.  Though the general featured may be emulating Patton, he is only a two-star and another bit of Hollywood liberty on display.

[Download] On The Road to Victory–The Red Ball Express (2)

On The Road To Victory–The Red Ball Express (Article)

Logistical Support of the Armies, Volume II Sep 44-May 45  (Book)