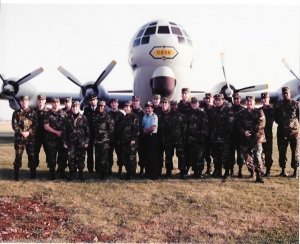 With Air Force officers making up only 18 percent of the service’s roughly 493,000 total force personnel, earning a commission is an accomplishment to be proud of, though the thought of one day becoming a general feels far off.

For the 25 lieutenants and captains who made up a 1992 Aircraft Maintenance Officer’s Course class, earning the rank of general officer wasn’t the first thing on their minds. For most, it wasn’t on their mind at all.

Vegas’ most daring rollers wouldn’t bet on those odds.

To put things into perspective, throughout its 64-year history, the United States Air Force Academy has graduated approximately 50,000 commissioned military officers. Only 737 of them have gone on to become GOs. The likelihood of attending the USAFA and becoming a GO is less than 1.5 percent.

“Sometimes I look at myself in the mirror and see the star on my uniform and I look around and wonder where all the adults went,” said Kubinec, Warner Robins Air Logistics Complex commander. “It’s humbling and makes me want to work even harder and develop those coming behind me.” 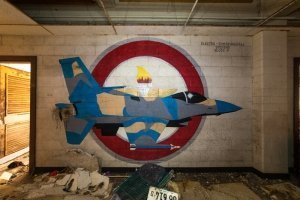 A photo by Walter Arnold of a mural inside now closed Chanute AFB, Illinois. Click the photo to view more shots of the abandoned base.

For some of the officers in the 1992 class, learning the content didn’t come intuitively.

“I think I actually failed the first test and I remember really freaking out,” said Lamontagne, New Mexico Air National Guard chief of staff. “After that, those guys in the class really helped me and encouraged me. We stuck together and were able to cruise through AMOC.”

All four of the GOs have made building strong professional relationships a priority throughout their careers. Some of those relationships grew during AMOC at Ott’s, a family owned restaurant near Chanute AFB that became the go-to hangout spot for the class.

“It was a greasy spoon-type joint that served all your American style food,” said Jolly, 82nd Training Wing commander. “After every test it was, ‘Alright, we’re going to Ott’s!’”

Jolly also touted the group’s flag football team as the best on base and another way for the young officers to build working relationships early on in their careers.

“Relationships are crucial at every level of leadership,” said George, deputy director of Resource Integration and Logistics Chief Information Officer, deputy chief of staff for Logistics, Engineering and Force Protection. “No matter if it’s leading in the local community, sports, or the highest levels of our military. Our journey started in the classroom at Chanute.”

Their time at AMOC came and went, but as luck would have it, Lamontagne and Kubinec found themselves stationed together at Shaw AFB, South Carolina, for their first assignment. 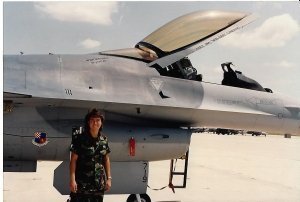 “Any maintenance officer will tell you that you really start to learn when you get out to your unit and see how operational maintenance works and start learning how to be an officer,” Kubinec said. “It was awesome to experience that and have a friend in Michele when we showed up.”

Their careers have taken them around the world and back again. George, Jolly and Kubinec serve on active duty while Lamontagne transitioned to the NMANG in 2000.

“Since I joined the guard and have a full-time civilian career, it’s even more important for me to stay in touch with my peers on active duty, reserve and guard,” Lamontagne said. “I don’t have those daily interactions so I work hard to build those relationships. It’s super critical to stay in touch.”

While their accomplishments look similar at first glance, the paths they took to earn their stars varied significantly.

“For me, one of the most meaningful assignments I had was in 2003 kicking off Operation Iraqi Freedom,” Jolly said while referring to a deployment where his squadron was responsible for 140 aircraft. “I felt proud we were there to do the job the nation needed us to do and watching our young Airmen generating those sorties, loading those weapons, and having the aircraft come back empty.”

Each has held positions of global impact including Kubinec, who spent time as the Senior Special Assistant to the Supreme Allied Commander Europe, the most senior military commander of the North Atlantic Treaty Organization.

“We had no idea where we’d end up,” George said. “The reason our relationships have lasted and we continue to celebrate each other’s success is because we went into this knowing we’d be much stronger together than facing challenges alone.”

No matter how long they continue to serve the Air Force, they know the connections and friendships they’ve made throughout the years will extend beyond the military. The legacy they leave behind will be those they inspire today.

“I feel very strongly about my responsibility to mentor other people now,” Lamontagne said. “It goes beyond rank and I want to help those who will fill our shoes one day.”

For Kubinec, the advice he gives to young officers is to simply be yourself.

“Diversity of all kinds is what we need, but the Air Force doesn’t need clones. Lead authentically and be yourself in your job and you’ll be much more effective than trying to fit a mold.”

The Air Force does not expect young officers to be perfectly fluent in their specialty the first day on the job, but it is never too early to begin building lasting relationships.

The four general officers who bloomed from the 1992 AMOC class prove that fulfillment comes from more than making rank.

“In the end, what we’ll reflect on is the meaningful relationships and the fun we had along the way,” George said.