Rosie the Riveter Shares Her Story with LOA 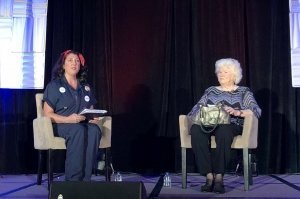 June shared her historical perspective with the association on a panel moderated by Ms. Sarah Franklin, LOA Vice President.

June expressed her enthusiasm of maintaining war airplanes in Oklahoma City, OK, during the 1940s, and the joys of supporting her family throughout her long career.

After the panel, June and her family toured the exhibit hall where she learned the latest technology in rivet removal. 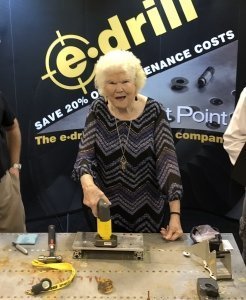 June was born May 4 in Wilson, OK.  Her desire to serve started at a young age, when attending high school classes in the morning and working at Abilene Air Force Base in the afternoons.

She graduated from Abilene High School in 1943 and continued her studies at Hill Business College.  She never lost her desire to learn and later in life attended classes at Rose State College and Oklahoma University.

In 1944 June got a job as a photographer at Camp Barkley, TX. When she heard that Douglas Aircraft was hiring she came to Oklahoma and applied.  In 1944, she was hired by Douglas Aircraft as an Assembly General Helper working on C-47 cargo planes.

June continued her federal career with a job as Clerk Typist at Ardmore Air Base, OK in 1945.  Love of aircraft and aviation motivated June to work for and earn a private pilot’s license for single engine aircraft in 1951 at 24 years old.

June went to work for the Federal Bureau of Investigation (both Washington DC and OKC offices) in 1947 where she transcribed the field agent reports.

In 1956, June came to work at Tinker Field where she held a variety of positions.  During her career, June earned many outstanding ratings, awards and commendations for her dedication to her work.  In addition to a career outside the home, June found time to raise a family, two daughters and a son.

She retired in 1985 after 36 years of federal service. Since retirement she has kept busy traveling, volunteering and enjoying her grandchildren and great grandchildren’s activities.