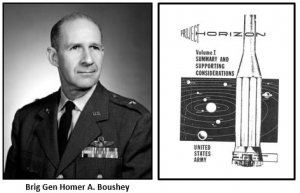 “Last year (1958) Air Force General Homer A. Boushey, (pictured) stated that a lunar military base someday will be vital to national security, that in one sense the moon represents the age-old military advantage of [‘high ground.’]  He is one of the many uniformed American leaders seriously thinking in terms of the military relation of outer space to the earth and human events thereon. While there is perhaps no unified agreement in American military circles on the concept that ‘he who controls the moon controls the earth,’ nevertheless, there is well-grounded agreement that vital military keys to our future national defense lie in outer space.”   LTC Robert B Rigg, US Army

Forty-eight years ago today (16 July 1969), Apollo 11 blasted off from Cape Canaveral, Florida and into the history books. With the recent discussions regarding a Space Corps, it is interesting to note the Army’s advocacy to establish a “post” on the moon using Saturn rockets (projected occupancy with 12 soldiers by 1966).

Project HORIZON never made it off the drawing board; however, we’ll see what the future portends. Attached are a weblinks to provide the “rest of the story:”
Col Decker

Note: Lt General Trudeau who penned the concluding quote in the article also signed the tasking memorandum. Also notice the article was published the month prior to the Project HORIZON document’s publishing date. If you are ever in Alameda CA, the USS Hornet Apollo 11’s recovery ship has an excellent display regarding the mission.