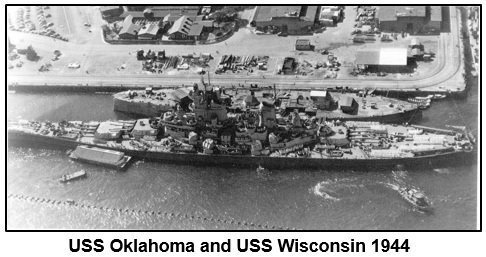 “During the weeks following the Japanese raid, a great deal of repair work was done by the Pearl Harbor Navy Yard, assisted by tenders and ships’ crewmen. These efforts, lasting into February 1942, put the battleships Pennsylvania, Maryland, and Tennessee; cruisers Honolulu, Helena, and Raleigh; destroyers Helm and Shaw, seaplane tender Curtiss, repair ship Vestal and the floating drydock YFD-2 back into service, or at least got them ready to steam to the mainland for final repairs. The most seriously damaged of these ships, Raleigh and Shaw, were returned to active duty by mid-1942.”
Post-Attack Ship Salvage (Naval History and Heritage Command Website)

Watching the 75th Pearl Harbor anniversary events reminds us of the heroism and sacrifice that fateful day; however, we will probably never see commemorative events extolling the post-attack salvage operations.

During much of World War II, fleet salvage operations continued and where possible, ships returned to the fight and unfortunately others were scrapped (USS Oklahoma) or left in place (USS Arizona and USS Utah). As you can see above the difference in battleship classes highlighted the might of America naval power and industrial capacity.

The Iowa class battlewagons were kept at 4 with the last two Illinois and Kentucky construction halted due to wartime aircraft carrier requirements. Another little known salvage effort was the bow of the incomplete Kentucky used to repair the damaged bow of the Wisconsin (after the ship collided with a destroyer in 1956). Bottom line: defense re-utilization is part and parcel of our logistics operations—do you have AMARG on speed dial?

Note: In May 1947, the Oklahoma capsized while being towed to the West Coast during a heavy storm. She had been purchased for $46,000 and was to be scrapped in San Francisco. The Arizona and Utah are still in place today. Remnants of the Arizona removed during the memorial construction in the early 1960s are tucked away near Pearl Harbor.