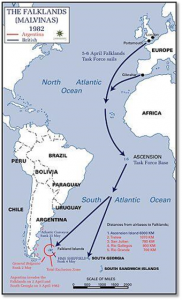 ‘It was dreadfully turbulent, we were in and out of the cloud tops, there was a lot of electrical activity with St Elmo’s fire dancing around the cockpit. The Victor was trying to refuel in that, it was having enormous problems. We could see the two aircraft bucking around, with the refueling hose and basket going up and down about 20 feet.’

Thirty-six years ago, I was finishing up technical training at Lowry AFB, Colorado and heading home to Louisville, Kentucky for 10 days leave prior to my first assignment to Spangdahlem AB, West Germany.

Other young Royal Air Force airmen (aircrew, engineers, and logisticians) during April 1982 were preparing aging “nuclear bombers” for a conventional strike against military units from Argentina who had recently invaded the Falklands/Malvinas Islands.

The key capability to ensure the success of these hazardous missions—aerial refueling—and adaptable logisticians and aircrew!