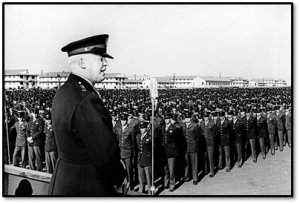 “The whole success of Air Forces operations in peace and in war depends upon all echelons being so disciplined that all commanders know that orders given will be carried out in spite of hell or high water. Unless we have the proper type of training to inculcate in the individual the proper spirit so that he does this instinctively and without question, we will never have an Air Forces.”

I hope those who attended the LOA Symposium enjoyed the opportunity to renew old friendships and prepare for the new and existing challenges we will face in 2018.

Upon the conclusion of the Second World War, Commanding General, Army Air Forces, Henry “Hap” Arnold “bequeathed” to his successor, General Carl “Tooey” Spaatz, observations of his previous 10 years serving in Washington D.C. The first “issue for discussion” was discipline.

It is fair to say these issues Hap focused on in this memorandum are as applicable today as they were in December 1945. Our first “Chief” passed away on 15 January 1950.

Also attached is a short You Tube video of the project Arnold advocated after World War II—telling the Air Force story!  The Air Force Story–Preview