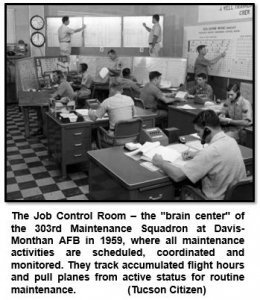 “Beginning in 1949, SAC established a Lead Crew School (later termed the Combat Crew Standardization School) to train and observe an aircrew’s standardized procedures. SAC expected commanders to send their best crews to the school, where instructors evaluated these integral personnel on their bombing procedures and discipline…Graduates of the school returned to their units and trained the rest of the unit’s bomber crews in the best techniques and procedures.”

Two articles and an Air Force Presents film made in 1966 in honor of the birthday of Strategic Air Command, 21 March 1946.

In 1960 the command ranks approached 270,000 and manned 70 plus installations across the globe.

The film covers all aspects of SAC’s command and control, operations, maintenance, and the alert force. For those who served in SAC you will recognize much of the equipment and attitude presented in the film—and still there when the command furled it’s guidons in 1992!

Fifteen minutes to launch the BUFFs…remember Peace is our Profession!