On 30 May 2020, two astronauts were transported to the International Space Station via the Space X Crew Dragon capsule ushering in a new era of human space flight.  SpaceX’s Demo Mission 2 was the first crewed launch from the United States since the end of NASA’s space shuttle program in 2011. Not only was this the first crewed flight from the United States in nearly a decade, it was  the very first commercially operated human space flight mission taking astronauts to low earth orbit.[i] The return of human space flight is part of the national security initiative to maintain space superiority, with safe reliable access to the International Space Station and eventually to deep space exploration. Space superiority is now accomplished through a partnership between the United States government and commercial launch providers who deliver assets into orbit. The 2017 National Security Strategy prioritized access to space through our commercial launch providers and extended national security protections.[ii] The return to American human space flight is a partnership between NASA and two commercial companies:  Space X and Boeing.[iii] In the tradition of the previous space shuttle program, the Department of Defense was tasked to provide rapid recovery of astronauts in the event of a globalemergency. The 45th Operations Group Det 3 reported through the newly designated Task Force 45, located at Patrick AFB, to execute the rescue mission for Commander, Combined Forces Space Component Commander. The 45th Logistics Readiness Squadron provides logistics support to a variety of mission partners at Patrick AFB to include Task Force 45. Installation level logistics support played a key role to ensure a rapid recovery posture for the Crew Dragon mission. 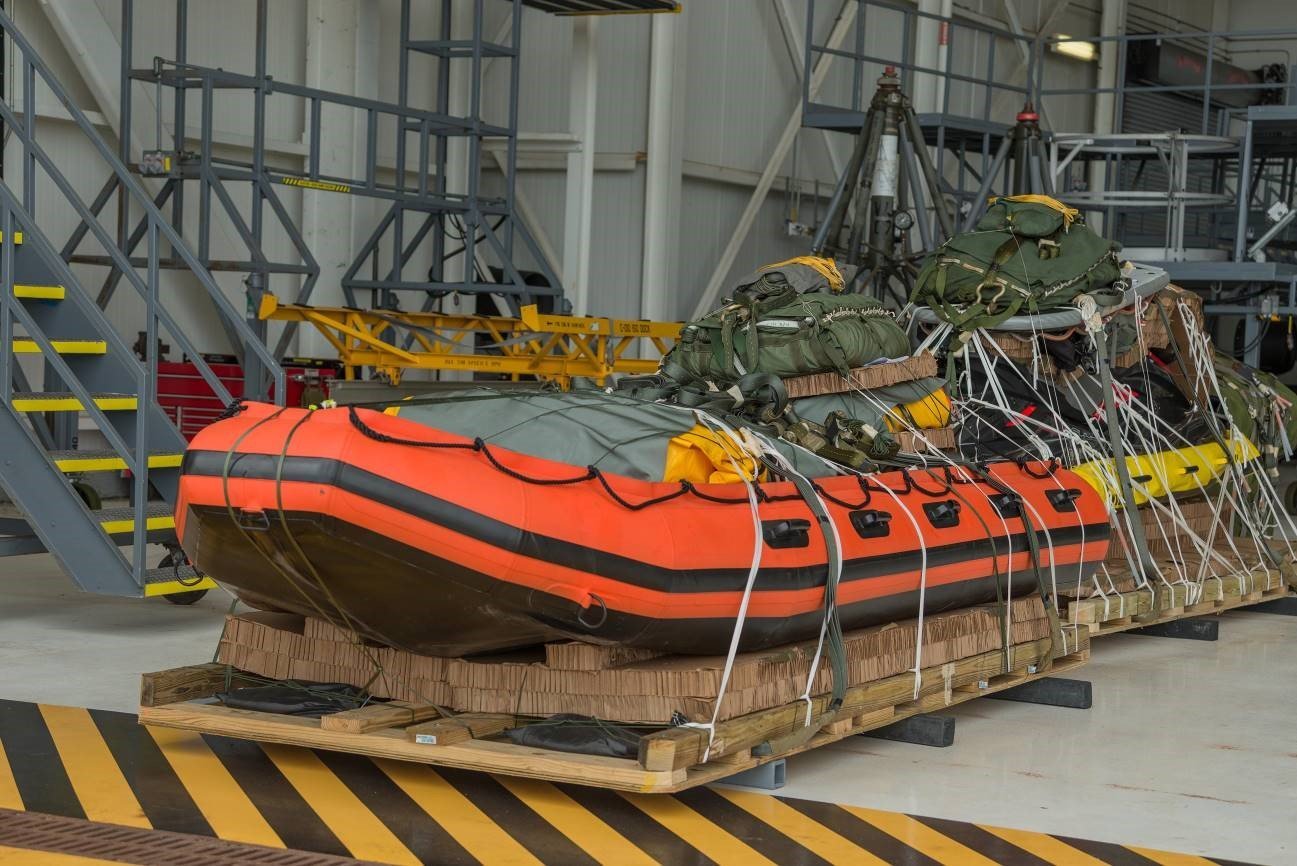 Logistics support to Det 3 has been an ongoing effort for over five years. Upon award of the Commercial Crew Program contract to Boeing and SpaceX, Detachment 3 sourced a variety of capsule and rescue specific equipment to re-establish this mission capability. The LRS Material Management Customer Support Team created supply and equipment accounts that provide direct mission logistical support while maintaining Financial Improvement Audit Readiness (FIAR) accountability. This was not an easy task as this mission is a shared partnership where NASA and DoD funding are both utilized and must remain audit accountable. Therefore, effective accountability required detailed equipment records to identify ownership between these federal agencies. In addition to supply equipment, the 45 LRS Vehicle Maintenance Team advocated for establishment of vehicle authorizations to facilitate operations between Patrick AFB and Cape Carnival Air Force Station. An additional complexity was an evolving functional chain of command. On 20 December 2019, the United States Space Force was established creating the sixth branch of the Department of Defense.[iv] The Airmen at Patrick AFB remained in the Air Force. However, the initial transition resulted in the Air Force Space Command immediately transitioning from a major command to a service component staff. Detachment 3 continued to execute a combatant command mission with support from a transitioning service. Despite a transitioning organizational command, logistics support was required to ensure mission success. 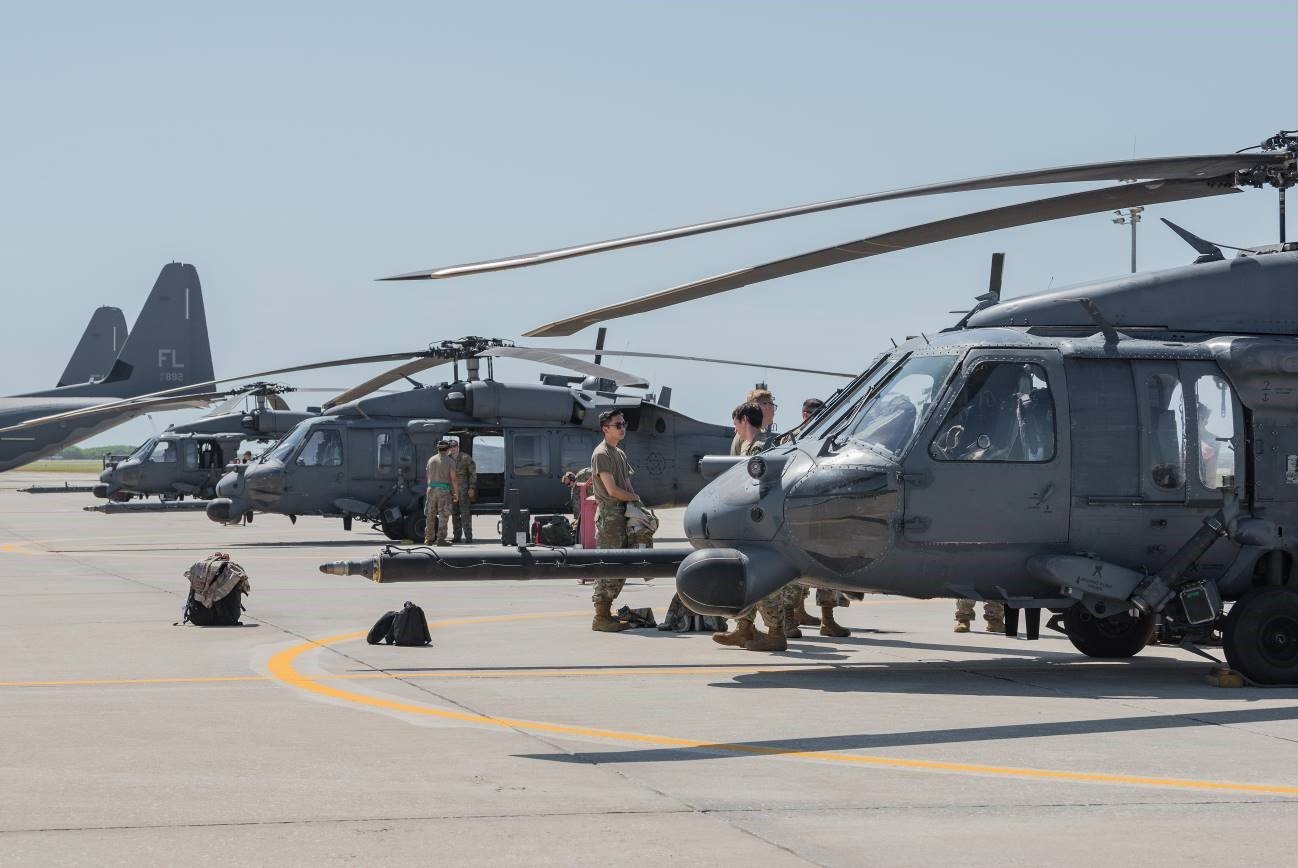 Det 3’s mission through Task Force 45 is to provide worldwide rescue coverage for recovery of NASA astronauts. To accomplish this mission, aircraft and rescue personnel are staged at Patrick AFB, JB Charleston, and JB Hickam to rapidly respond anywhere the capsule might land. For the latest mission, all tasked forces arrived at Patrick AFB for equipment familiarization then forward deployed to JB Charleston, JB Hickam, or remained at Patrick AFB. As logisticians, the operational planning was the equivalent to a Joint Reception Staging and Onward Integration movement scenario. 1Lt Jared Bjork was assigned as the LRS liaison to Detachment 3. As a Logistics Readiness Officer, Lt Bjork was uniquely qualified to coordinate all facets of logistics support from the squadron. All core competencies of the LRS provided support to this RSOI movement. Rental vehicles were sourced and delivered through the Vehicle Maintenance Flight. The Material Management Flight guaranteed supply accounts were available to source needed aircraft parts and unique to the 45 LRS the Munitions Team embedded into Material Management also helped coordinate a last minute M-295 Para-Rescue unique flares for requisition and use. The DLA contracted POL Team prioritized fuel requests for the alert aircraft and provided Hot-Pit refueling for the HH-60 aircraft to maintain alert posture during launch activities. The LRS’s Deployment and Distribution Flight ultimately had the largest burden. 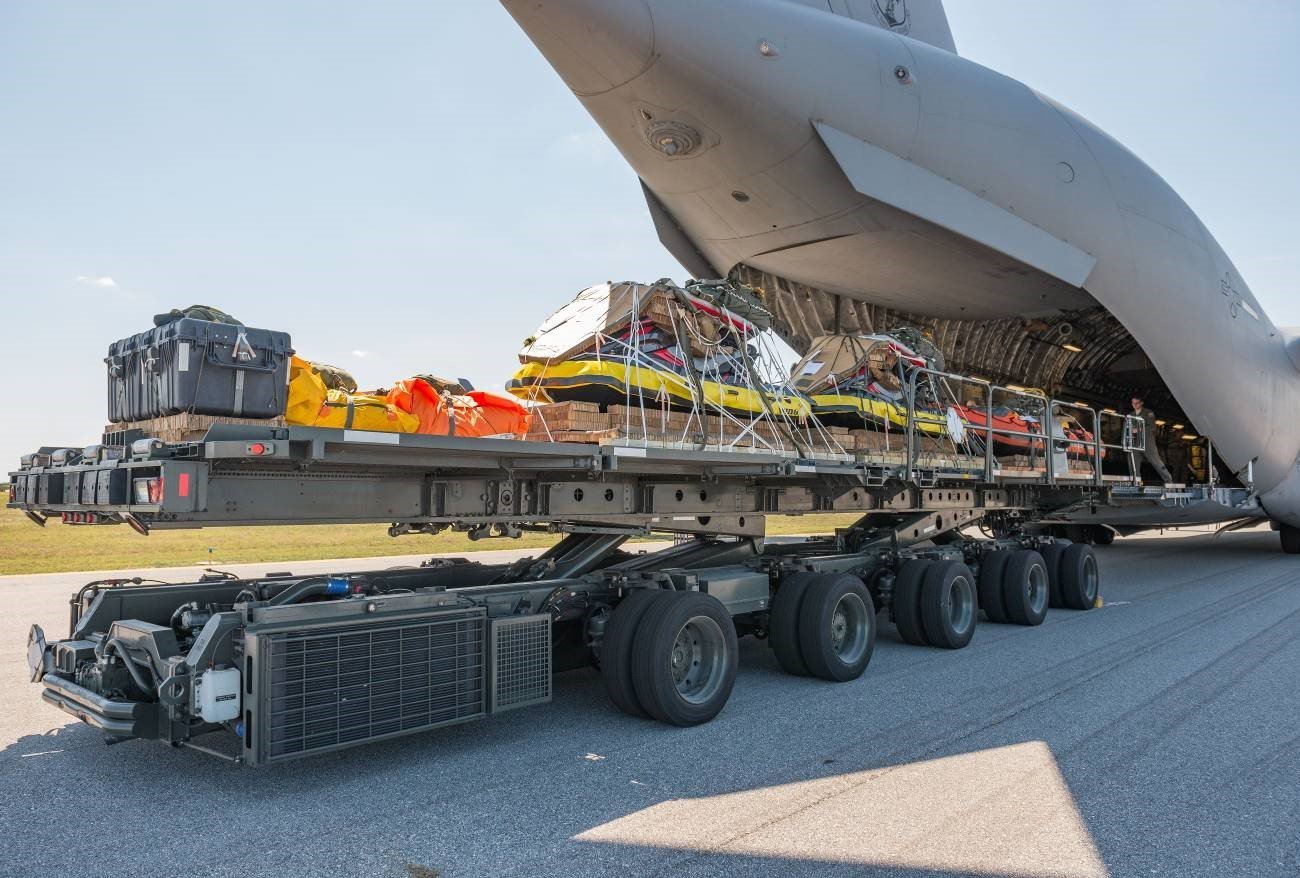 As the mission approached the Deployment and Distribution Team shouldered the burden of executing logistics movement for this mission. This included reception and transportation of the incoming personnel/equipment from the four units that were tasked to deploy in support of the operation. Additionally, the rescue equipment is stored at Cape Carnival Air Force Station where training was conducted three weeks prior to the launch. However, aircraft operations were tasked to operate out of the airfield at Patrick AFB. Therefore, the rescue equipment; 8 Combat Rubber Raiding Crafts, 6 Advanced Rescue Craft Jet Skies, 2 RAMBs (Rigged Alternate Method Boat), 6 ISU 90s, and 18 463L pallets, was transported to Patrick AFB via ground transportation during a limited time window, between training and aircraft alert. The Installation Deployment Readiness Cell compiled the equipment data and created Unit Type Codes and load plans that safeguarded in-transit visibility and an effective aircraft configuration. The 45th LRS Air Terminal partnered with the 920 RQW Aerial Rigging Team to provide a joint inspection to validate safety of flight. Finally, the Air Terminal Team with the assistance of Airmen across the LRS loaded the aircraft to enable alert posture prior to the launch of the DM-2 mission. 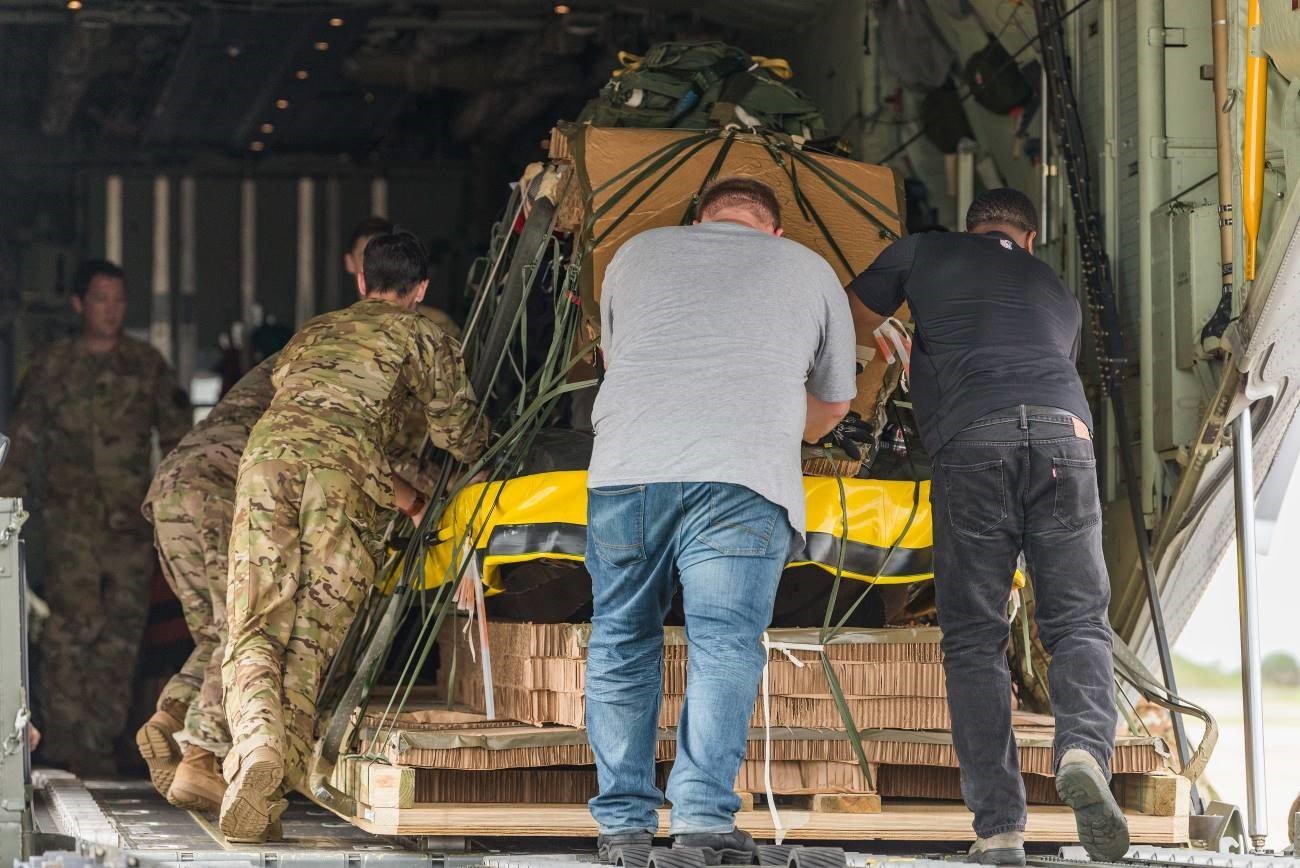 The logistics support plan that was characterized as RSOI was also similar to what a Contingency Response Unit would execute to enable alert posture and rapid response to an emergency. Lt Col Michael Thompson Detachment 3 Commander, lauded the 45th LRS support saying, “the mission was made possible due to logistics support throughout our detachment’s journey and rapid recovery of NASA astronauts would not be possible without their support.” Personally, I could not be more proud of the 45th LRS. The 45 LRS’s motto is “Promptus et Paratus Doctorum” meaning ready and willing professionals the team proved worthy of the Latin words on our squadron patch with this herculean logistical effort. 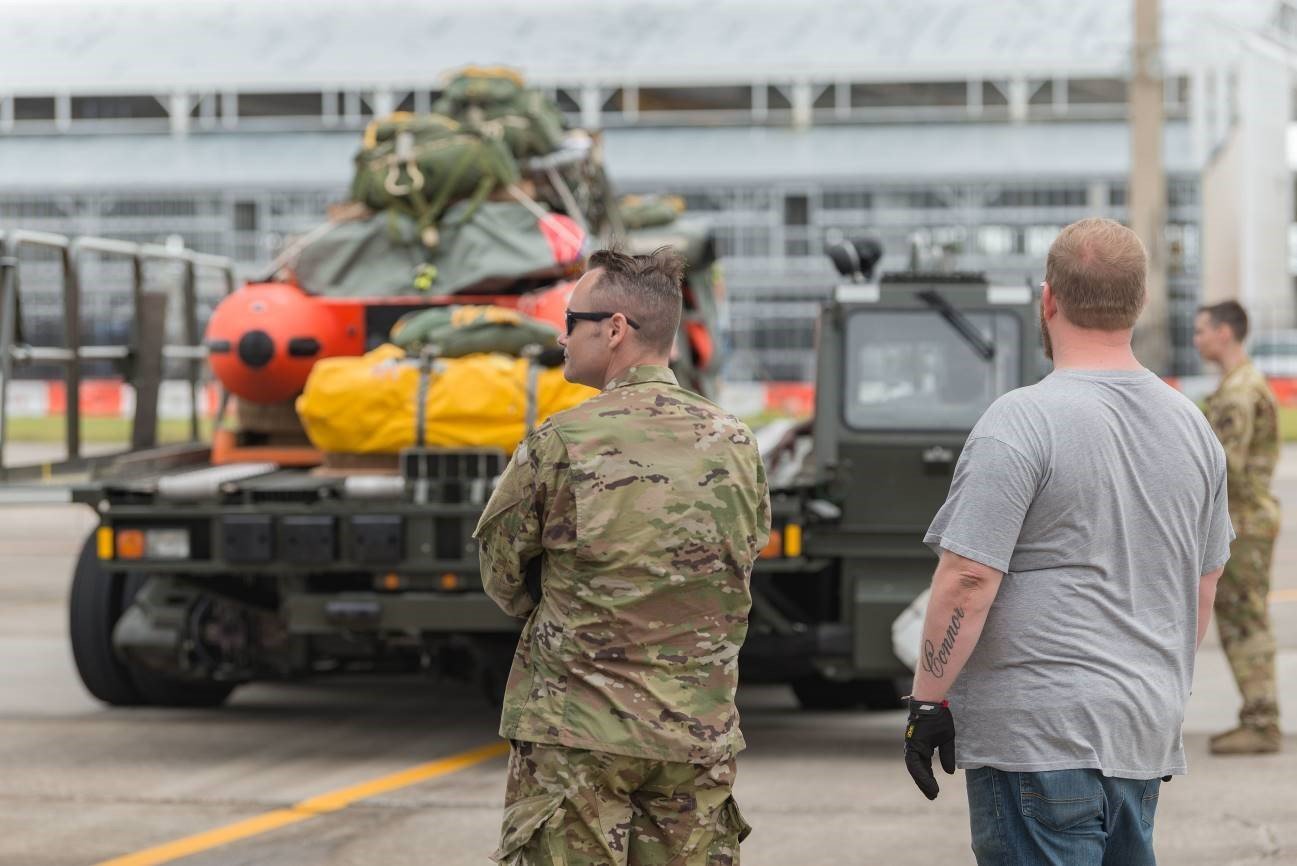 This was also a vital training opportunity for 1 Lt Bjork. As the project officer for an operation that encompassed all facets of LRS support, he was able to apply Logistics Readiness Officer Core Competencies in a real world operation that happened to be a historic moment for our nation. That is what makes our profession an incredible opportunity. Every DoD mission requires logistics. As Logistics Readiness Officers, we have an opportunity to help coordinate that effort and make a lasting impact on behalf of our Nation. 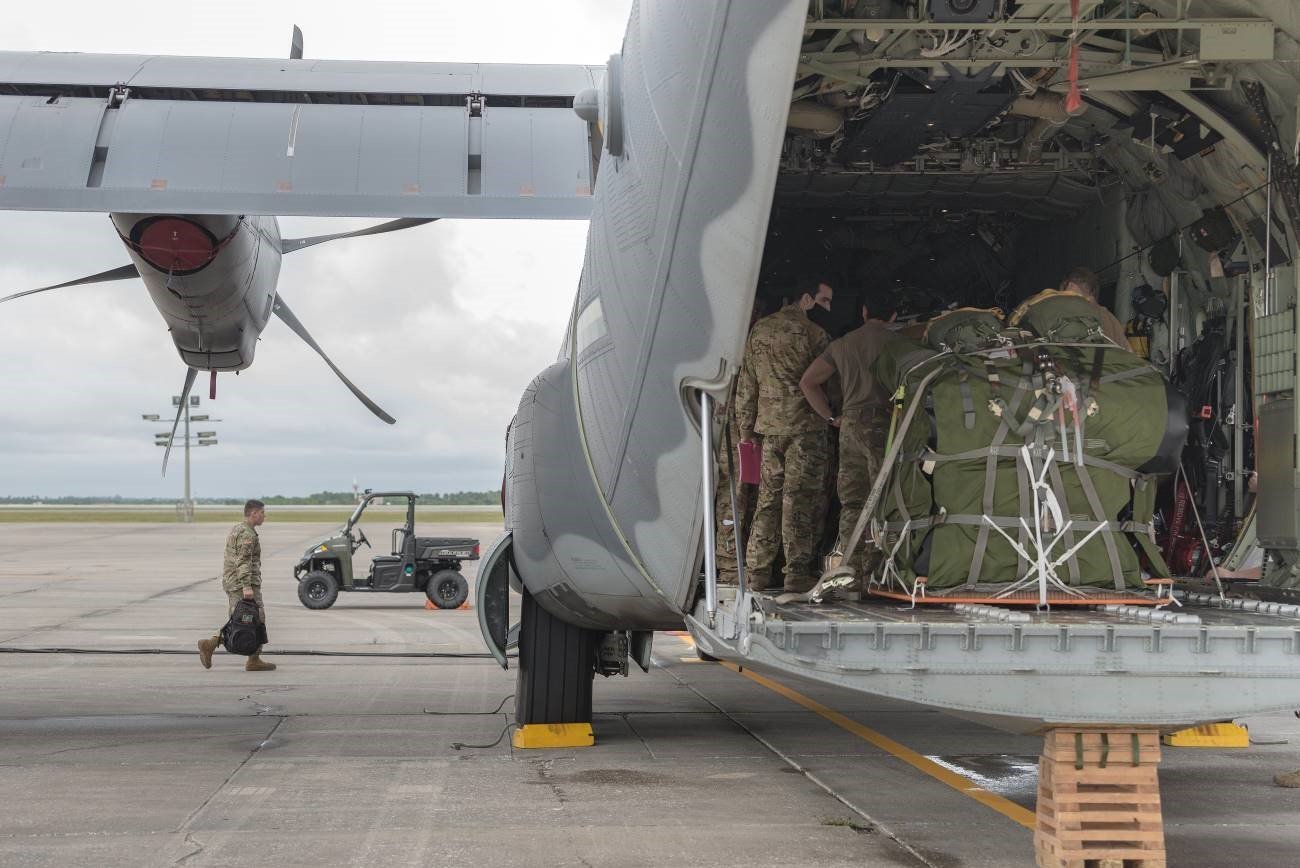 The Space X Crew Dragon mission is only the start of the new era of Human Space Flight. The recent launch proved functionality of the Falcon 9 and Crew Dragon capsule. NASA’s contract with SpaceX to provide six human space flight missions with the next one tentatively scheduled for August 2020.[v] With additional commercial launch providers entering the marketspace, Det 3 is prepared to provide rescue support for routine human space flight operations.

Looking forward as the first mission has successfully executed, the LRS is compiling our lessons learned to capture how support to this mission will be optimized. Future support is growing as these lessons learned are identified and my team transitions to “LRS 2.0” to maximize our logistical support. For example, the 45 LRS Logistics Planners are working with USSF to establish a new UTC specifically suited to support this capability. As additional requirements are assessed, to include new equipment and vehicles, the LRS team will continue to assist with this process to maintain accurate accountability. Ultimately, Det 3 will remain a mission partner and key customer of the 45th LRS with a unique mission requiring daily world class logistics support. The men and women of the LRS are embracing this new mission and looking forward to a future supporting unique mission sets within the United States Space Force.

Maj Jacobson is a career Logistics Readiness Officer and is currently the commander of the 45th Logistics Readiness Squadron. He was commissioned in 2005 from the University of New Mexico and has a Master’s Degree in Business and Transportation Management and a second Master’s Degree through Air Command and Staff College in the Multi-Domain Operational Strategist concentration. During his 15 year career he has served in various assignments to include AMC, PACAF, USAFE, and the HAF staff.