A story my father shared with me before my assignment to Minot AFB, ND in early 1990 was the crash of a B-52F and KC-135A near Hardinsburg, KY on 15 October 1959.  The aircraft assigned to the 4228th Strategic Wing (Columbus AFB, MS) were part of the recently instituted nuclear airborne alert code named STEEL TRAP. 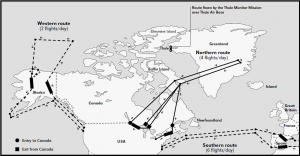 Pop was an 18-year-old country boy who like many others heard the crash and saw the illuminated horizon from the next county over. He joined up with a few friends and scrambled into cars to drive towards the crash site but turned back after authorities began securing the crash site areas.

I had asked him if an historical marker had ever been authorized and he told me that one had never been erected in honor of the 12 SAC professionals who had flown this mission or the eight crew members who had lost their lives.

Fast forward to retirement last year and working with our Louisville based Air Force Association Chapter #407, we negotiated the wickets to have an official Kentucky Historical Society roadside marker approved and this past Tuesday dedicated on the 60th anniversary of the collision and crash.

The AFA chapter’s Secretary/Treasurer CMSgt (Ret) Bobbie Smith (also a Hardinsburg resident who experienced the events of that evening) contacted many “teenagers” at the time for their perspectives and they too attended the small country church for the ceremony.

The remaining survivor Electronic Warfare Officer 1Lt Gino Fugazzi, was not able to attend the dedication; however, 35 family members represented three of the twelve crewmembers: the B-52’s navigator 1Lt John W. Mosby and instructor navigator Captain Lyle P. Burgess.  Also, the KC-135s navigator 1Lt Harold E. Helmick’s two brothers and his son were there.  Another family in attendance was the KC-135’s instructor navigator Major Thomas M. Beebee.  Major Beebee was relieved from flying the mission due to the birth of his daughter earlier that day.  Unfortunately, he was part of the recovery effort and helicoptered up from Columbus the following morning after the crash.

The marker is situated approximately a ½ mile from where the B-52 crashed and 2 miles from the KC-135’s impact area. 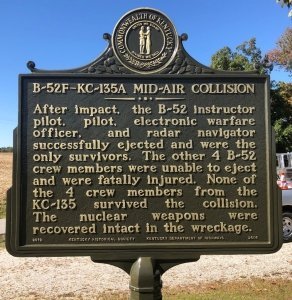 *Service Members who survived the collision

Now what does this have to do with logistics?

The buildup of the nuclear deterrence forces in the late 1950s and early 1960s mirrored the logistics miracles of the Second World War.  Eighteen KC-135 tankers were being built every month…our newest tanker the KC-46 will be built at a rate of 18 per year.  Combined with the basing requirements for what would be over 820 tankers and eventually 744 B-52s, training air and ground crews, building and fielding the rapidly expanding missile forces, and of course retiring B-36s and B-47 aircraft kept Air Force logisticians very busy!

The provided articles and video clips provide a glimpse of the strategic forces and the challenges faced during the busy days of the Cold War.

If you ever travel the back roads in rural Kentucky, please drive over to the Black Lick Baptist church and observe the beautiful countryside and reflect on the efforts of so many six decades ago and ask if America could repeat this logistical effort in the 2020s?