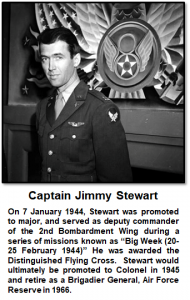 Acknowledging “BIG WEEK” again this year (20-25 February 1944) by recognizing one of the thousands of United States Army Air Force Airmen who flew these important missions against Nazi Germany; the beloved actor Jimmy Stewart.

Recently promoted to Major (7 January 1944), Stewart served as Deputy Commander of the 2nd Bombardment Wing during BIG WEEK. The selfless actor enlisted into the service prior to America entering World War II and went from making $12,000 a week as an actor ($200,000 in 2017 dollars) to $21.00 a month.

It took the entire country to fight the Second World War—and it is still amazing what the “Arsenal of Democracy” produced in just under four years (December 1941 – September 1945). From all walks of life, a spirit of “let’s get it done” prevailed. There were plenty of instances where injustice still prevailed; however, America 2018 could learn much from the Greatest Generation who survived the Depression, fought a world war, rebuilt our enemies and persevered against a post-war foe during the Cold War.

Enjoy the pictures in both of these articles—many I have never seen published in a public forum.

Jimmy Stewart’s selflessness is indeed an example for all Americans to remember and emulate!

How Jimmy Stewart’s agony in It’s a Wonderful Life came from extreme PTSD he suffered after he lost 130 of his men as fighter pilot in WWII, Dan Bates, London Daily Mail, available at:
http://www.dailymail.co.uk/news/article-3825552/Jimmy-Stewart-suffered-extreme-PTSD-lost-130-men-fighter-pilot-WW-II-acted-anguish-filming-s-Wonderful-Life.html