Air Force refueling history was recognized this week in 1951. 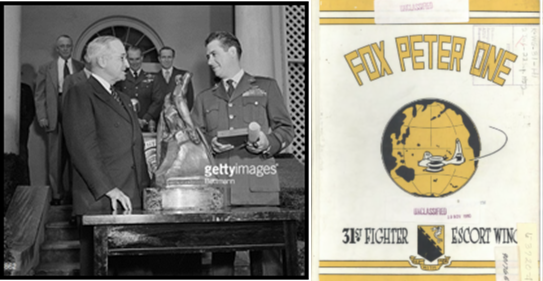 Col David C. Schilling Harmon Trophy – 23 October 1951
IT GIVES ME a great deal of pleasure to make this presentation this morning to Colonel Schilling.  I have the honor to hand you the certificate and the medal. The trophy is a little too big to carry, but we will go around and uncover it.  I congratulate you. I congratulate the Air Force, and I congratulate you on the success you have had in getting a jet across the Atlantic for the first time without a stop– something very fine for the welfare of the country and the world, I think.   I hope you will continue to work on these things.
– President Harry S. Truman, 23 Oct 1951

Air Force refueling history was recognized this week in 1951. Colonel David Schilling another of the “boy colonels” during World War II earned greater fame in the post-war Air Force. His aerial refueling exploits for both making the journey over the Atlantic and Pacific oceans. The missions were known as Fox Able One (originating from then Selfridge AFB, Michigan) and Fox Peter One (originating from Turner AFB, Georgia).

Additional information regarding the Fox Able One mission: Fox Able One and the Cold War and see the attached history report regarding Fox Peter One.